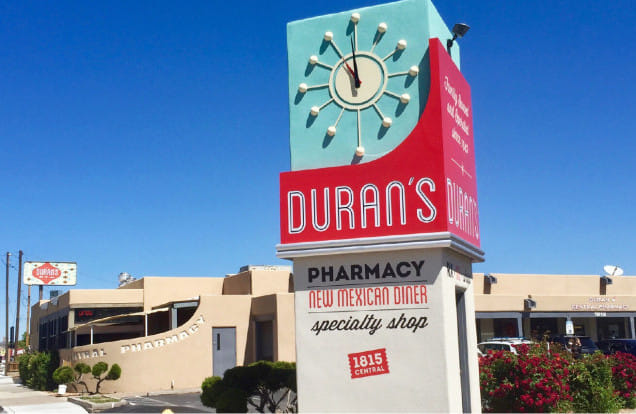 an iconic local business on rt. 66

Over the years we've earned a reputation for amazing food, eclectic shopping, and topnotch personal pharmacy services. Duran's is proud and grateful to serve our local community!

FAMILY OWNED AND OPERATED FOR 50 YEARS

In business since 1942, Duran Central Pharmacy is one of the oldest commercial establishments in Albuquerque. The original owner of the drugstore was Pete Duran, a graduate of Notre Dame and the Colorado School of Pharmacy. As a resident of Old Town, he wanted his business close by on or near Central Avenue, Route 66.

In 1965, Mr. Duran retired and sold the store to his staff pharmacist, Robert Ghattas, a graduate of the University of New Mexico School of Pharmacy. The business began to outgrow its location and in 1975 the pharmacy moved to its current location at 1815 Central Avenue NW, where it has since been located.

In 2010, Robert decided it was time to step back from the business and retired. Mona, his daughter, has continued the family business credo, sharing her passion in the care of their patients.  The pharmacy has grown considerably over the years, reflecting changes in the health and medical fields. In addition, the business now includes a large selection of toiletries, gift items, and medical supplies. The original soda fountain has evolved into a full blown restaurant, serving fantastic New Mexican food and is famous world wide for its red and green chile.

Duran Central Pharmacy is proud to be an independent community pharmacy supporting other small and locally-owned businesses in West Downtown Albuquerque. 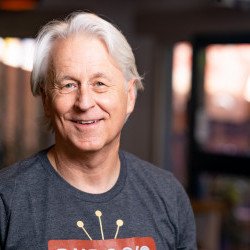 Raised by Ibex sheep in the Florida Mountains of southern New Mexico, Jay strives for the human interactions available in the store with our valued customers and exceptional staff.  Remember the term “Jack of All Trades?"  For Duran’s, it is “Jay of a High Number of Trades." 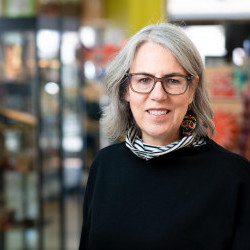 Karen is so much more than the Front End, Office and HR Manager. How is that even possible you ask? Karen’s retail business sense has proven invaluable to the uniqueness of the shopping experience at Duran’s. Where else could you buy a truffle, carry-on luggage and a book about the songs of Led Zeppelin?

Duran Central Pharmacy takes pride in maintaining personal relationships with our customers. We want to find a solution for you!  Please reach out to us via phone, email, or social media with questions, special order requests, or unsolicited free advice.  We are here for you!